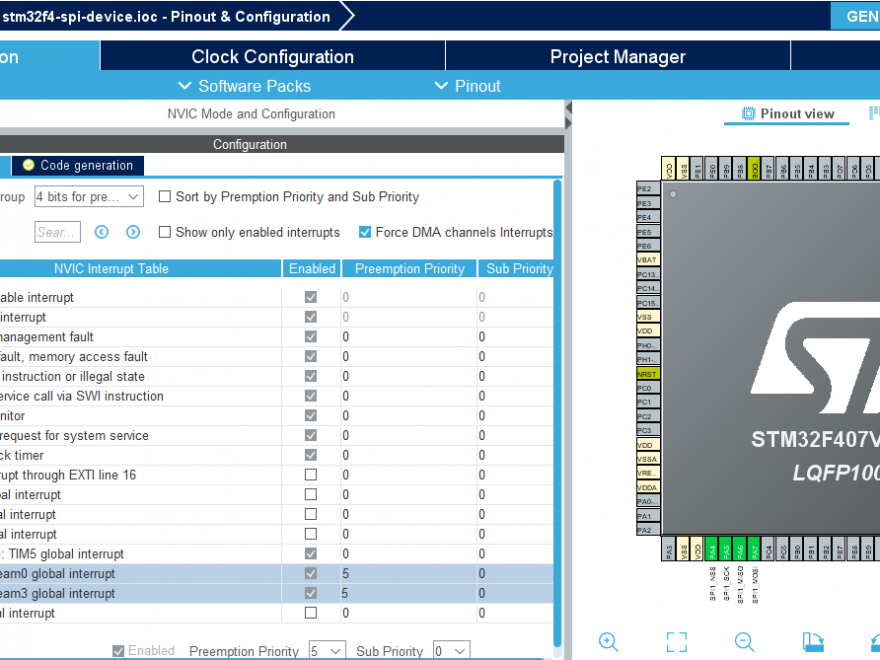 In this post I’ll go over my steps to get an STM32F4xx microcontroller running FreeRTOS as an SPI peripheral/device/slave using DMA so it can run in the background while the main task is running. There are a lot of examples online of setting up STM32 SPI controllers, but very few where it is used in slave mode, especially with DMA and integrating this with FreeRTOS. In particular, the main problem I found is that by default, all the interrupt handlers have the highest possible priority (priority 0), which means that you can’t call FreeRTOS API functions from inside them. This means, for example, that you can’t send a notification to wake a thread from the interrupt handler. The solution is to reduce the priority of the DMA interrupt handler to below the level the FreeRTOS handler is running, as described below.

This post will focus on the SPI setup and configuration steps using STM32CubeMX, rather than the whole system design and communication protocol (that will be a future post). The final application will have a raspberry pi controller talking over as shared SPI bus to a number of STM32F412 devices, each running FreeRTOS. For the purposes of this post however, I will use a raspberry pi connected to a single STM32F4 discovery board (which has an STM32F407 MCU on it, which for the purposes of this post behaves identically).

I will be using STM32CubeMX to generate the code for the startup and system initialisation, as well as the HAL for the GPIO and the SPI/DMA peripherals. This tool actually seems to work reasonably well, especially for getting a project up and running quickly without having to read through all the documentation to even get the thing to start. It may not be optimised, but it is a decent starting point. The code it generates is scattered with start/end user code comment blocks. If you are careful put all of your own user code between these blocks, then you can freely go back and update the project in CubeMX and re-generate the outputs and it will keep all of your code, which makes it easy to change peripheral configurations and test the results.

The really nice part is that it can generate code compatible with GCC, including a startup and linker script, and a makefile. This is refreshing, as most other tools try to lock you in to one of the proprietary IDE/compiler ecosystems. (As a side note, this blog series (https://vivonomicon.com/2018/04/02/bare-metal-stm32-programming-part-1-hello-arm/ has a really nice rundown of “bare metal” programming stm32 devices, starting from the startup script, linker, all the way up to compiling c code and running it)

I won’t go over the details of how to set up the build environment in this post, but here is the setup I use:

All the sources, including the CubeMX project, firmware and test controller code are available here: https://github.com/mcgodfrey/stm32f4-spi-device

Create the project in CubeMX

Start by creating a new project using the MCU selector – search for and choose the correct MCU. For the discovery board, this is an STM32F407VGT6. This will then drop you into a window with an empty setup. Follow the steps below to create a simple project with a single GPIO output and the SPI peripheral initialised.

Manually fix up the project and add FreeRTOS

CubeMX has the option of adding FreeRTOS to your project for you (under middlware->FREERTOS). However, it wraps it in another os abstraction layer with very little documentation – I prefer to just use FreeRTOS directly. To do this:

Under the C_INCLUDES add the FreeRTOS include directories

Finally, the Makefile generated by CubeMX has a clean section, but, even though it is a windows tool, it uses the linux rm command. So, change that to:

The SPI protocol is just the physical layer, so we need a communication protocol to sit on top so that the controller and device can communicate. For the pupose of this post we will just use a very simple example. The device will have a data buffer which stores a string. The controller can either read this string, or write a new string to it to overwrite it. The protocol to allow this will be:

Note: this is just example code to get the SPI up and running. There is no error checking, status checks, buffer overrun checks, etc. These would all need to be added before using in a real application.

main.c is automatically generated by CubeMX with initialisation calls for the GPIO/DMA/SPI peripherals, as well as the system clock. All that we need to do is set up the FreeRTOS scheduler and create a couple of tasks. First there is a dummy “worker thread” called blinky, which just flashes an LED. This would be the main thread which actually performs the work. The second thread is the communication thread which we’ll go into in more detail below. An abridged version of the code is included below with some of the MX generated code along with my additions (see the link above for the full code). Remember to only add code between the /*USER CODE BEGIN …*/ and /*USER CODE END …*/ blocks.

The actual comms interface is implemented in comms.[hc]. This task is structured as a main while loop which sets up the SPI DMA transfer and then sleeps, yielding control back to the main thread. It only wakes briefly when notified by the SPI transfer complete interrupt, before going back to sleep again. It uses the FreeRTOS Task Notification API (https://www.freertos.org/RTOS-task-notification-API.html) which are basically a lightweight binary semaphore implementation. Ie. the loop “takes” the notification and will sleep until another function (the SPI transfer complete interrupt handler in our case) “gives” it back a notification.

The code below should be fairly self explanitory. After defining the tx/rx/stored-message buffers, the main comms loop works as follows:

The script does an initial read of the device string, then writes to it and reads the result back. Output below:

The basic setup is working, showing how to set up an SPI DMA transfer in device-mode to listen for data from the bus controller. It works well with FreeRTOS, once the priority on the DMA servicing interrupt is set lower than the FreeRTOS priority. There are a number of improvements to be made before this would be robust enough to include in a real application: