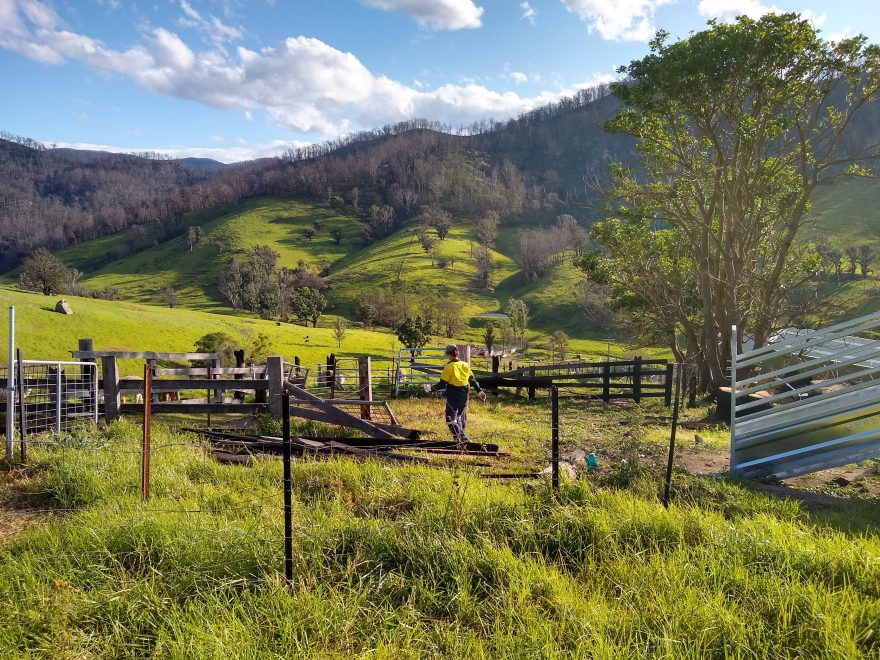 The old upper stockyard near the house was all wood and was damaged in the fires. This is the stockyard which is used to move the cattle on to the truck for transport – you can see the metal ramp on the right of the image above. This needs to be repaired before any cattle can be sold, which should hopefully be happening soon, so there is a timeline to get it finished.

You can see in the image the remains of the old stockyard. This area used to be a ~11x11m area with several gates and an alleyway to force the cattle out of the holding pen and up the ramp on the right onto a truck. Most of the wooden posts are either completely burned, or too badly damaged to be re-used. There are a few rails still attached on the left hand side of the yard, but they are being held on by a thread and aren’t up to the job of containing the cattle. So the plan is to remove all the old wooden fences and replace them with new metal ones. The metal ones cost a bit more, but should go up much more quickly and easily than re-building in wood. Also, they will hopefully fare better should they be hit by fires again in the future.

The first job was to clean up all the loose wood and wire lying around. Then a new temporary metal/wire fence was installed to keep the alpacas in while the stockyard fences were removed and replaced. Then the tractor could come in to rip out all the burned posts and carry off all the large pieces of wood. This was our first real attempt at driving the tractor and manipulating the bucket on the front. There are a lot of degrees of freedom to deal with, but a lot of fun, and I think we’re getting better at it. Much more practice needed though.

The yard is now mostly cleared and ready for the next steps which are:

I’ll update this page with links when there’s more progress.