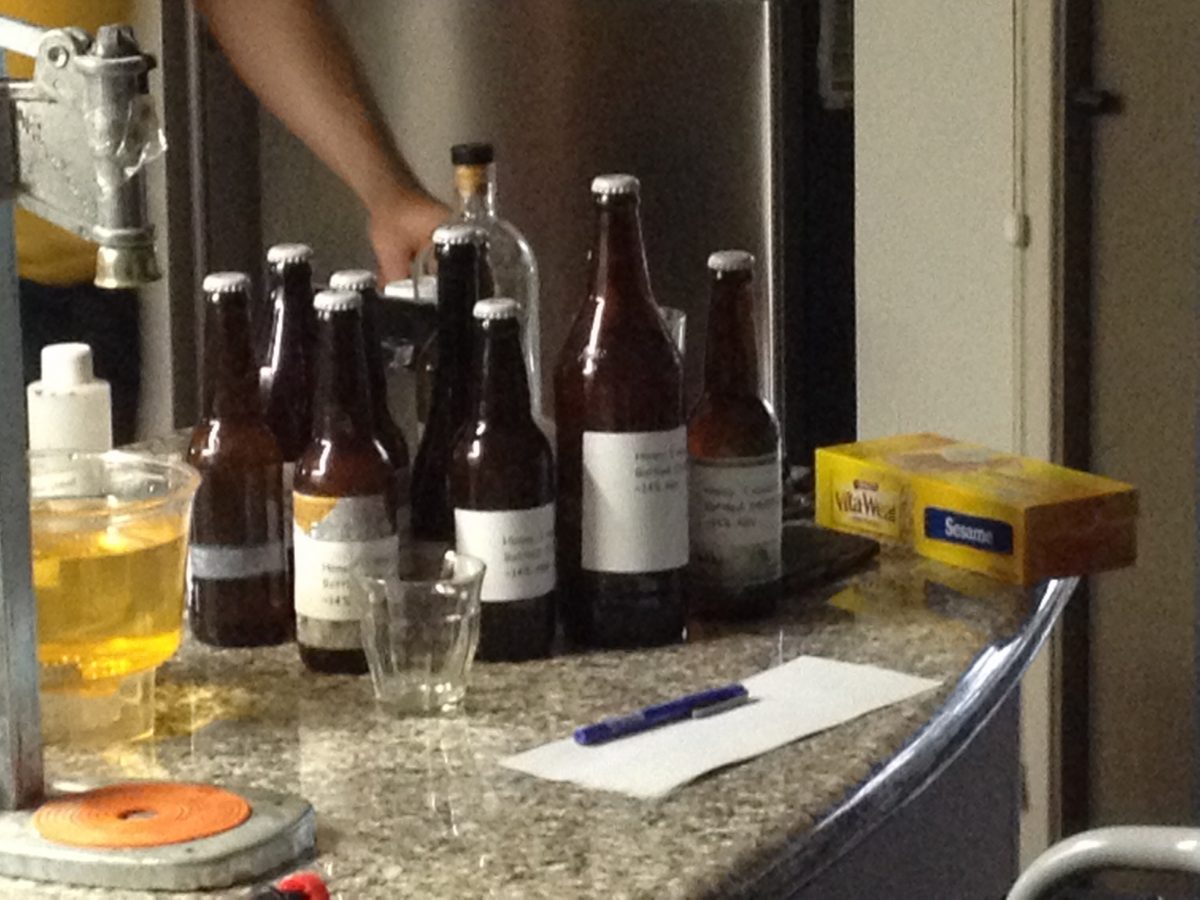 Having endured the long, difficult, indeed tormenting wait we finally reached the stage where our mead could be released from its glassy confines… and placed in new glassy confines. That’s right – its bottling day. Of course, no bottling would be complete without a surreptitious tasting of the wares. Or for that matter, without delicious food, good company, and a new beer to fill up the glassware that the mead was liberated from. So we set aside a Saturday of the long weekend, I brought the mead out of storage, and we went through the slow process of bottling.

After a few months in storage (10/10/2014 – 04/04/2015) fermenting away, they were ready! Or so we hoped. Mead 1 – the light honey mead was still quite cloudy, while mead 2 had clarified marvellously. You could see through to the other side of the Kitchen. It also had a hell of a lot of sediment at the bottom. Neither smelt particularly funky – which is good! The last thing you want after a few months of waiting is infected mead.

The first step was working out how to get our mead from demijohn to bottle. As it turns out, the standard siphon didn’t fit in the top of the demijohns. Some careful consideration, and we ended up going with the more traditional – suck on it until a siphon forms and then disinfect and hope for the best – technique. It worked with only a small amount of mess, and the first mead, our light number, ended up safe in bottles to be know as ‘Honey, I mead you…”.

Some testing of wares convinced us that it needed a little longer. No doubt about it, it tastes like mead. But it also has an unpleasant ‘young wine’ kind of flavour, that hopefully will disappear with age. We also ran some test to determine the alcohol content – which we estimate to be about 14%. A little more than intended, but who is going to complain about getting a little more sloshed? Hopefully there isn’t enough sugar left to cause any bottle bombs, but we’ll check in a month to make sure.

Proud of our handiwork, we set about the next task of bottling, only to find, much to our dismay, that we had insufficient bottles for the second mead. Dedicated to our task as we were, we set about consuming enough beer to provide us with another litre of bottle storage. And while consuming, we got cracking on the replacement beer (but I’ll leave that for another post).

Finally ready for the second mead, we set about siphoning into bottles. Unlike the light mead, where the alcoholic properties were pretty subtle,  this had a really clear smell of alcohol. It also was really reminiscent of fortified wine in flavour, but the honeys floral qualities were still present. Once again though, it tasted a tad under done, and will probably need even longer than the first mead to mature. Bottling done, we named it ‘the heady meady’ – heady pronounced heed-y of course. Some rough calculations gave us about 15% for the alcohol content, however, that seems a little low given the clear taste of alcohol (and the massive amount of honey used). We ended up going for >15% on the label. That’s good enough for sale in Australia right?

Final conclusion: Our meading seems to have been pretty successful, all things considered. Unfortunately we won’t know whether we’ve made a great mead for another year or so, but even if it is only ok, we can still turn it into a delicious mulled mead with plenty of spices. Just have to work out a recipe for that…