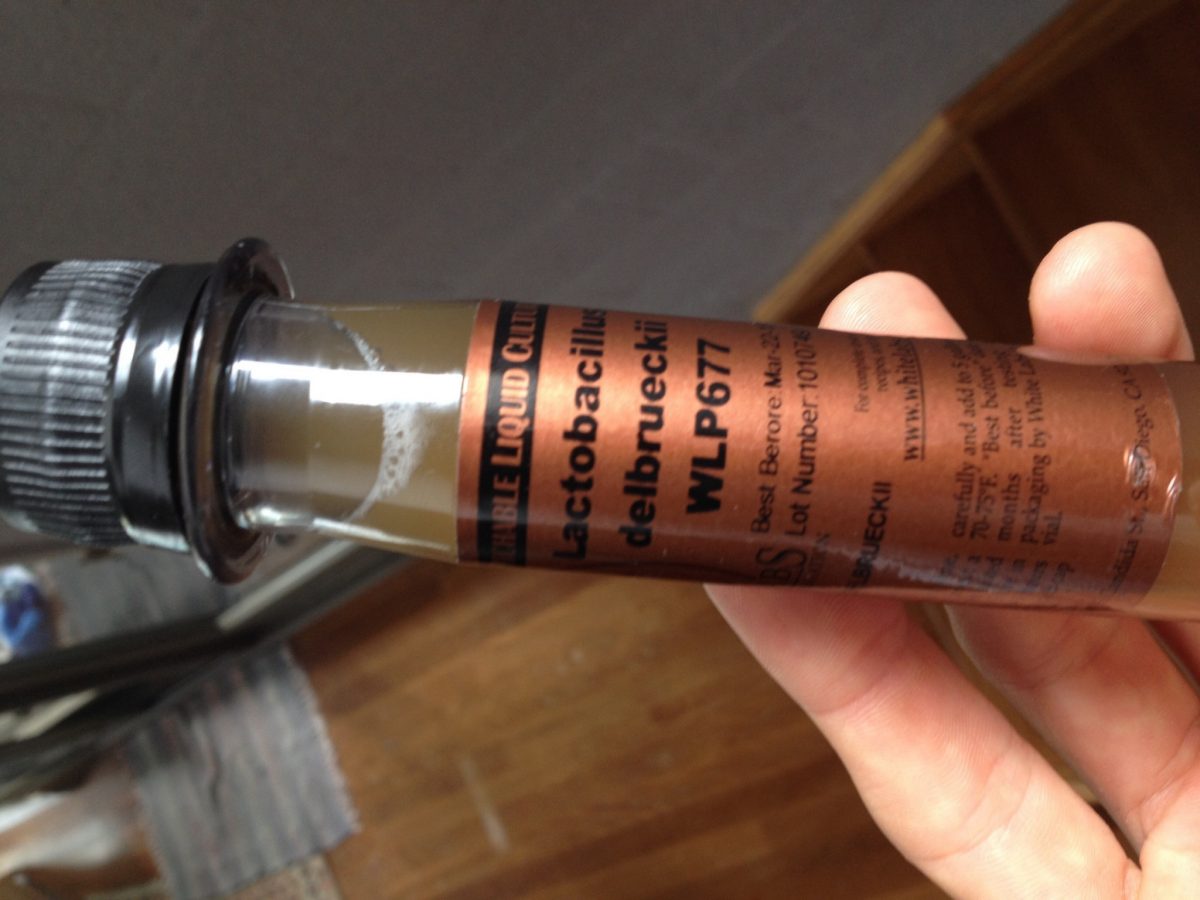 Feeling a little sorry for our demijohns, now empty of their meady goodness, we decided we should fill them with something else. Naturally, it couldn’t be anything normal, but rather something novel and untried. We ended up settling on favourite of ours – sour beer! For those who don’t know, sour beer is a style of beer that is (as the name suggests) sour. Some examples of this are Lambics, Gueze, and what the Yanks call ‘Wild Ales’. For an added bit of funkiness, we decided that we’d also use a Saison-ish yeast, which should add some additional funky flavours.

Of course, the best laid plans are always foiled by circumstance, and naturally the brew shop was out of the right bacteria or liquid yeast, so we had to improvise. Matt ended up acquiring some lactobacillus delbrueckii for the souring (As you can probably guess by the name, it will introduce a hell of a lot of lactic acid). For the fermentation, Matt picked up a general Belgian ale mix, which should introduce some interesting flavours to add to the sourness from the Bacteria.

For the base we went with a simple can of Liquid malt extract (1.5kg Coopers amber). The main point being that the yeasty bacteria-ry funkiness should carry this beer, and the hops and malt should just be a vehicle for this. Similarly the hops was a double of a bittering at 45 minutes into the boil (8g of Columbus), followed by some noble hops, 15g of Hallertau, at 5 minutes left in the boil.

We boiled for 1 hour in total, and the aim was to have about 8L. That’ll leave plenty of space in the demijohns for the yeast to go a bit wild and crazy. It also means that we’ll hit a higher gravity, and will probably be zooming in on the 6-7% mark in terms of alcohol content (note that the tins are for 10L of water).

In the end, we wound up with a bit extra, so we split the batch three ways, the third in an ordinary glass bottle, which only has a foil cover. We won’t dose this with any bacteria, but leave it to see what actually happens. The other two we are going to dose at different times, the first, after two days, the second, after a week. This should give us a bit of a range in terms of sourness. One will be pretty lethal, while the other will hopefully be mellow-ish (but not too mellow).

The hope is this bad boy (for now, I’m going to call it ‘sour power’) will be ready a lot quicker than the mead. That said, it may well be one to leave in the cellar and wait two years, hoping that the time turns it delicious…

P.S. One of the reasons most home brewers are reluctant to do a sour beer is that once the infection gets in, you can get it out. Basically every beer you make will be sour! I personally don’t think this is a problem, but it does somewhat limit your options. This shouldn’t happen with the demijohns, since there aren’t any tap fittings, but they may still require some serious cleaning.

Post Script: So Basically it turns out that the Lactobacillius really cannot handle hops, and needs an IBU of less that 8, and our beers was about 30IBU. Instead, we pretty much just have a Belgian Beer with all the funkiness (and there is a bit) provided by the yeast. I will say, it is pretty delicious, based on the sample I had. It should only improve. So even though our souring wasn’t successful, it was still delicious…